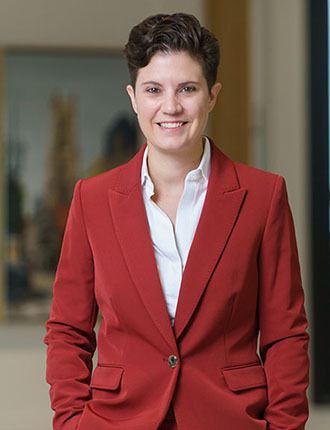 Ms. McBride focuses her practice on commercial real estate transactional work, including commercial leasing, corporate and mergers and acquisitions work, government relations matters, and energy work. She recently assisted in the firm's representation of the New Orleans Building Corporation, the city-owned public benefit corporation that serves as landlord of the Harrah's New Orleans Casino, in its negotiation of the historic amended and restated lease for the Casino property.

Outside of the firm, Ms. McBride previously served as a philanthropy committee member of the New Orleans Chapter of the Federal Bar Association Young Lawyers Division and was the Committee Chair in 2017-2018. She also won the Chapter's President's Award in 2018, in recognition of her work to plan the Chapter's very first career day for high school students at Crescent Leadership Academy. Ms. McBride has also served as chair of the Association for Corporate Growth (ACG) Louisiana, Young ACG Louisiana network, since 2018, and has chaired ACG Louisiana's Women in Corporate Growth Committee since 2019. Additionally, Ms. McBride was a competitive amateur boxer for five years and won a silver medal at the National Women's Golden Gloves in 2010.

Represented a green technologies company in connection with a debt issuance in excess of $25 million.

Assisted the City of New Orleans in negotiating a Cooperative Endeavor Agreement with the Audubon Commission for the redevelopment of a portion of the New Orleans Mississippi Riverfront into public park space.

Assisted a purchaser in its acquisition of a large shipping facility located in Lafayette, Louisiana.

Assisted a start-up mobile application company in the preparation of its online privacy policy and licensing, use, and subscription agreements.

Ms. McBride is Chair of the Association for Corporate Growth ("ACG") Louisiana, Young ACG Louisiana network.  She is a Philanthropy Committee Member of the New Orleans Chapter of the Federal Bar Association Young Lawyers Division.  She is Secretary of the Board of Directors for NetWork Volunteers, a Louisiana non-profit corporation.  Ms. McBride is also the Social Chair of the Loyola University New Orleans College of Law Young Alumni Board and was voted its 2017 Young Alumna of the Year.

Outside of her legal practice, Ms. McBride performs with the Foxhole Improvisational Comedy Troupe and is an active member of Stonewall Sports in New Orleans.  She is a former USA Boxing coach and amateur boxer and was a National Golden Gloves Silver Medalist in 2010.

Ms. McBride received the President's Award from the New Orleans Chapter of the Federal Bar Association in 2018 for her service as Chair of the Young Lawyers Division Philanthropy Committee and its Landmark Cases project.  The Best Lawyers in America:  Ones to Watch 2021 Edition recognized her for Business Organizations (including LLCs and Partnerships), Corporate Law, Energy Law, Government Relations Practice, and Mergers and Acquisitions Law.