Mr. Lee joined Stone Pigman in 1974, is a member of the firm and chairs the firm's Commercial Litigation Practice Group. For the last 15 years, his practice has included a concentration in insurance and insurance class action lawsuits. Mr. Lee has experience in handling coverage issues, bad faith claims, mold claims, regulatory issues and class action claims with a myriad of substantial issues.

Defended a Hollywood actor/director/producer in a federal jury trial involving $18 million claims of securities law violations and fraud brought by investors, including actor Stephen Baldwin, in an oil-spill-remediation technology corporation.

Defended major insurance company in a class action lawsuit that alleged that third-party claimants are automatically entitled to recover for diminished value of damaged automobiles.  After an evidentiary hearing, the trial court certified both a plaintiff and a defendant class.  Successfully obtained a reversal of that judgment on appeal.

Defended insurance company against class action lawsuits that alleged improper handling of claims arising out of a large hail storm in a three-parish area.  After securing a consolidation of the cases filed in Orleans Parish Court, he successfully defeated the plaintiffs' motion for class certification after an evidentiary bench trial.

Defended insurance company in the Federal District Court for the Eastern District of Louisiana in two class action lawsuits in which the plaintiffs alleged that the insurance company's use of credit reports in analyzing certain insurance claims violated the Fair Credit Reporting Act.

Mr. Lee has received three LSBA President's Awards, first in 1993 for his work as Chair of the Continuing Legal Education Program Committee, in 1998 for work as Co-Chair of the Practice Assistance and Improvement Committee and in 2010 for work as Co-Chair of the Standing Committee on Diversity.  He has been named to The Best Lawyers in America in the fields of bet-the-company litigation, commercial litigation, insurance law, antitrust litigation and personal injury litigation-defendants, and to Chambers U.S.A. America's Leading Lawyers for Business in the field of general commercial litigation and to Louisiana Super Lawyers.  In 2006, the Louisiana Bar Foundation's Board of Directors selected Mr. Lee as the 2006 Distinguished Attorney in Louisiana.  He was inducted into the Tulane Law School Hall of Fame in 2013 as a member of the inaugural class.  In 2018, he was inducted as a member of the National Bar Association Hall of Fame.  In 2020, Mr. Lee was recognized as a Local Litigation Star by Benchmark Litigation. 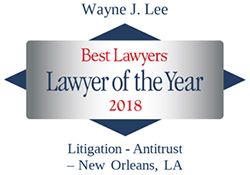